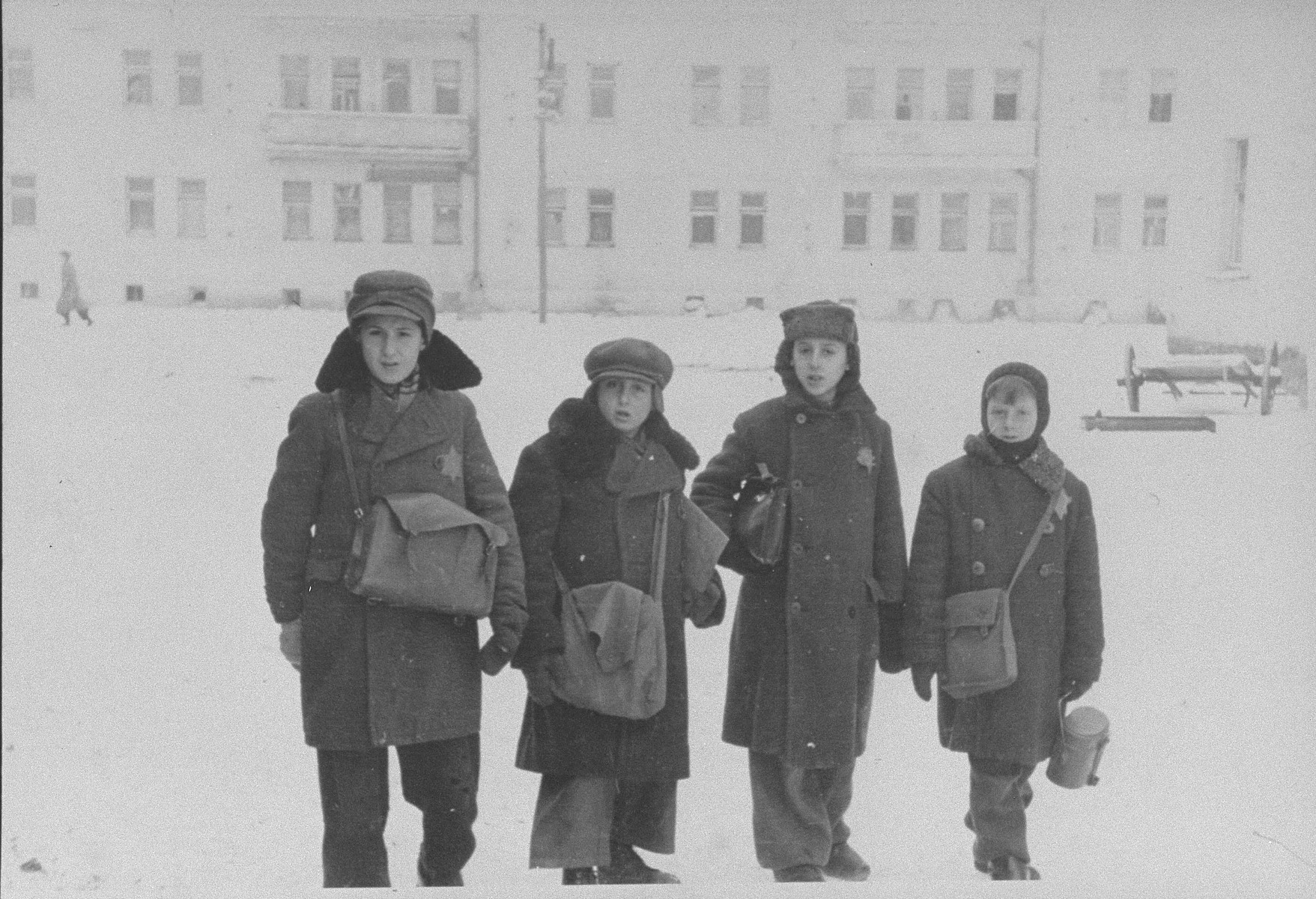 “The world that once was no longer is. Gone are the holy communities the sainted Jews, the children and their mothers, the rabbis, the libraries of thousands of sacred books adding up to hundreds of millions, the holy Torah-scrolls and Friday-night candlesticks and Saturday-night spice boxes. A world that no historian, sociologist, anthropologist, writer will ever be able to reconstruct — not even a hair of it, a shadow.

A thousand years of life in Europe spanning the entire continent — gone. Disappeared. Destroyed. Read the books, the yearly announcements of survivors’ gatherings, the exhibits put together by different cultural organizations whose members have crawled back into the cold gas chambers to bring back memories, men who have returned to the towns and cities of their births to bring back mementos — pieces of the past. Part of a door, a snapshot of a street in 1939, anything so long as one can say ‘I am connected, I am part of this destroyed world’ ”

This is how Rabbi Ephraim Oshry begins his introduction to his Responsa from the Holocaust. The world that once was no longer is. Rav Oshry, the Rabbi of the Kovno Ghetto who ultimately survived the war and rebuilt his life and served the Jewish people. While in Kovno, he answered Halachic queries from many petitioners and having been appointed, for a time, as the Nazis as caretaker over a warehouse of confiscated Jewish books, he was able to research his answers with the “contraband” volumes of Rabbinic literature. (In fact, when readying them for publication, his first three volumes of responsa were virtually able to be printed without editing).

Last Yom HaShoah, I mentioned my fascination with the shailos that emerged from the Holocaust. But this year, I cannot help but be stopped in my tracks as I contemplate the symbolism of Rabbi Oshry’s words from the hakdama to his work.

The world that once was no longer is.

In his writing, he clearly refers to the world of European Jewry that was decimated by the Nazis. True, that world is gone, never to return again. And yet, the Jewish people have rebuilt and flourished. At the same time, on this Yom HaShoah, it feels as if the world that once was no longer is. The world in the aftermath of the Holocaust is now changing, transforming into something more sinister and negative. It’s not entirely surprising. The world watched and dragged their feet for years as Hitler, yemach shemo vezichro, had his way. These are the things that fill my mind on this Yom HaShoah.

–A little over a month ago, as I was getting ready to leave the AIPAC Policy Conference in Washington DC, I was waiting at a street corner outside the convention center. Next to me, among the various protesters, was a man with his own cameraman seemingly trying to get Jews riled up. I engaged with him in conversation and was eventually accosted with viscous anti-Semitic remarks, as he spewed to countless before me. There were two things that bothered me though, more that the hate that he spouted. First, he was claiming that Auschwitz was merely a myth, a statement that he lured to get me to talk to him in the first place. Rather than being a haven of death and destruction, this man claimed that there was a brothel and an ice cream parlor on the grounds of the camp. Hardly the accoutrement for something that described as vividly horrifying by accounts of people who were imprisoned there. The second thing that made me angry about this individual was that he wasn’t just a crazed, ignorant fool trying to get under the skin of Jews. He was an individual who ran for public office in California. While he was crushed in the election (rightly so), there were still 89,000 people that cast their precious vote for this lunatic. 89,000 people, some of whom I’m sure were Jewish, who threw caution to the wind and cared not for his lies and libel.

–People love blaming millennials for just about everything. Apparently, 22% of millennials do not know or are not sure what the Holocaust is, while a staggering 40% don’t know that 6 million Jews were murdered.

–We live in a world where the most prominent newspaper in the world prints cartoons depicting Jews worse than we were portrayed in German “newspapers” of the 1930-40’s. The explanation for this blunder seems almost as insane. Being accused of having a slant or bias one particular way is one thing, but to allow such drivel to slip through unchecked is unbelievable. (Or maybe it isn’t.)

–We live in a time where we’ve had two attacks on synagogues in six months and have lost 12 holy souls. Rabbi Yisrael Meir Lau, former chief rabbi of Israel and himself a child survivor of the Holocaust, noted that the attack in Pittsburgh was reminiscent to him of Kristallnacht. The most recent attack, just last week, was on a day in the diaspora when we recite Yizkor in memory of those who have passed on. I am not certain, but I would be surprised if there were no people who were to recite Yizkor for individuals who perished in the fires of the Shoah at the Chabad of Poway that fateful morning.

–Today, I also think about Rabbi Menachem Mendel Taub, the Kaliver Rebbe, who passed away that night at the age of 96. This nonagenarian survived the horrors of the Shoah and rebuilt what he could of his life. While he reunited with his wife in Sweden in 1947 after liberation, Taub used as a guinea pig by Dr. Mengele, yemach shemo vezichro.

These experiments rendered him sterile. The “hallmark” of the Rebbe was that he was probably the only Chassidishe leader without a beard, a choice that he did not make himself. The “Angel of Death” at Auschwitz experimented with the Rebbe, and the chemicals rendered him virtually clean shaven for the rest of his life. This scar stared him in the face for 70 years. The Rebbe was also known for reciting the Shema at his speaking engagements. An article from Aish.com explains:

Throughout his life, the Kaliver Rebbe told and retold the story of how his fate to survive the war was sealed. In one of the darkest moments, just days ahead of his liberation, he cut a bargain with God pledging to dedicate his life to passing on the flame of Jewish continuity if his life was saved.

“The Nazis were literally throwing Jews into fires,” he recalled. “I heard Shema Yisrael being sung by a young boy and I turned to God and said, ‘Let me live, and I will say Shema Yisrael with the living.’”

For the next 75 years he would keep to his promise, opening schools, teaching and bringing a community almost entirely destroyed back to life. Wherever he would go, he would tell of his ‘agreement with the Almighty’ and often be brought to tears as he led other Jewish children in the same tune he heard that day. The Shema became his anthem, his revenge, his message to the world.

Rabbi Oshry was correct. The world that once was is gone, and it will not come back. But the Jewish people are also changing. We are also losing our Holocaust survivors, the ones who lived through atrocities. Despite the museums and recorded testimony, will the Shoah be ultimately relegated in our minds to the likes of the Crusades or the Spanish Inquisition? Horrible things that befell our people, but soon we’ll be without a first-hand mouthpiece to tell us what it was like, and the ignorance is already starting to creep in. This cannot be. The Holocaust must be different, and one that will make a lasting memory on us. It seems bizarre to utter that, but in the not-so-distant future, our survivors will be gone and we will be the ones forced to tell their tale.

Even with the museums and educational curricula, will we be up to the task? The world sat back and hesitated to act once before. We cannot afford to do the same.