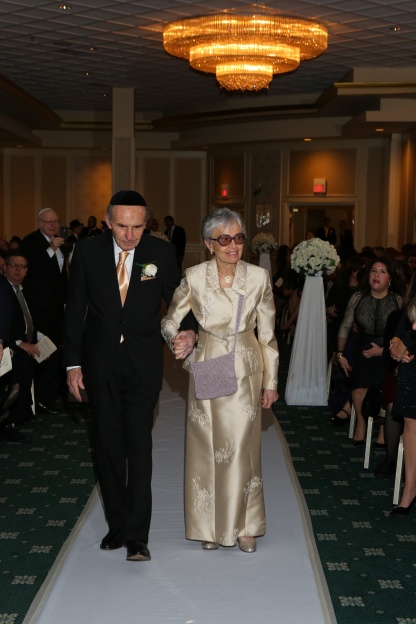 Savta Z”L and yblc”t Saba walking down the aisle at our wedding. For more on the dress, see below. For more on that hideous purple purse, check out the 50:45 mark of the funeral video.

The funeral of Rita Balk can be viewed here on the Bnai Amoona website. The remarks below can be seen at around the 40 minute mark.

In March of this year, Town and Country Magazine published an article titled “What Will Happen When Queen Elizabeth II Dies?” Queen Elizabeth, very much alive at this time, has ruled over England since February of 1952. The byline states plainly: When the time comes, it’s predicted to be a “traumatic” event. The article continues While it’s difficult to know exactly what to expect, it’s likely Buckingham Palace will be prepared to announce the news, particularly if the Queen dies following a long illness. According to The Telegraph, the Palace has detailed plans in place for the Queen’s funeral and the subsequent succession, which has been given the code-name “Bridge.” The media is said to be well-rehearsed too, with British news networks including the BBC and ITN practicing how they will broadcast the Queen’s death. Depending on the time of day, it’s likely news of the Queen’s death will be broadcast immediately. If she dies overnight, the announcement could be delayed until early the following morning. The BBC will suspend all planned programming and provide detailed coverage of the royal news, which will include a rendition of the British national anthem while a picture of the monarch is displayed on screen, The Daily Mail reports. Comedy shows on BBC TV channels are also predicted to be suspended until after the funeral.

There was no article written about the Queen of the Balk family, a woman who exuded royalty and grace. No detailed succession plan, no television broadcast, no codename. But a traumatic event nonetheless. My Savta, Rita Balk, Rachel Bat Yisrael, will not be mourned by the entire British commonwealth like Queen Elizabeth II, but she was regal in every sense of the word. Not just by the Buick Regal that she drove for a period of time. She was the Audrey Hepburn of Quincy, IL. My mother of blessed memory would explain that she married into the Mary Tyler Moore family. To us, and many others, she was the classiest woman on either side of the Mississippi. She was sharp, and at times, blunt. When the idea of moving to a home with a first-floor master bedroom came up, she was asked why not build an elevator in their beautiful home on Polo Drive. To which she responded “I don’t have time to wait for an elevator!”

While someone with that level of grace and beauty could’ve rested on their laurels, she wasn’t content with coasting through her life. Saba reminds us there were serious smarts behind her beauty as well. She was the top student in her high school class, and for those who may quibble that earning the highest marks at Quincy Senior High School may not be all that impressive, she co-salutatorian of her class at the University of Illinois. I tried unsuccessfully to find how many others were in that graduating class, but you can visit the campus and see the bronze plaque that’s still there with her name on it. For this achievement, her picture was in every newspaper from Champaign to Chicago, and everywhere else in the state of Illinois. She took these clippings and put them into a scrapbook. But rather than be on display for all to see, it was hidden under a tablecloth in the living room. And when someone would bring it out, she would shudder and quickly return it to its proper place. As noted, a woman of her class and grace could have flown to New York or Milan to procure the finest garments that were available, but she didn’t do that either. She made many of her dresses, not because she couldn’t find any to her size or liking. She enjoyed doing it, so she did it.

Savta had an eye for color, one that has been passed down to many members of our family. This can be seen by spending only a short time in the house. Whether it be masterful, expensive pieces of art or less fancy artwork in pink Popsicle-stick frames, there are colors everywhere. You can’t walk two feet in the house and not see it. I’m not sure what she’d say about this more conservative tie that I’m wearing right now. Her eye for color showed itself on the artwork adorning the walls of the house, as well as in her clothing, much of which she made herself. She would tell my parents after I was born with red hair “Never put red on a redhead,” a phrase which I think about to this day before even wearing a red tie, even despite my red hair being, less than plentiful now as it was back then. Yet, she didn’t just make this statement to my parents and ride off into the sunset, but sent many different things in different other colors for me to wear. She made all of these pieces herself. This eye was not only for color but for decor as well. When her mother, my Grandma Jeanne moved into her nursing home, the plan was for her dining room set to be sent to my parents house in Cleveland. But on delivery day, we were shocked to see an eighteen-wheeler show up on our quiet, residential street. The truck indeed contained the dining room table and chairs, but also included many other pieces of furniture that we not only did not know that we were to receive, but that we did not yet have room for! When my father called to protest, Savta responded, “Mitchell, how could you take the dining room set without the other pieces? They go so well together!” And that was that.

The last few years have been so hard for our but even harder for Savta. It was so painful for us to see our queen be stricken and rendered almost speechless. Only she had plenty to say, you just needed to exert yourself to hear her. She had so much to say that she struggled through her illness to get out. It would take her moments to respond when you would ask her something, but it’s not that she didn’t hear you or didn’t care to answer you. But we would wait for her to be able to respond, and she would. Nevertheless, she would welcome new grandchildren-in-law and great-grandchildren with a smile. One of the most cherished pictures from my wedding is my wife dancing with Savta. Even in those moments, her sharpness could still find its way through. On one occasion when Estee and I had the privilege to bring our son to visit her and Saba, we were changing his clothes getting him ready for bed and he began walking around in his diaper. She muttered on cue “where are that kid’s clothes?!” just loud enough to hear. And it was hilarious. We were so fortunate to bring our kids to visit for her birthday this year, something that looking back was such a tremendous blessing. Savta even alleviated one of our pre-wedding stressors. There were disagreements between various parties involved on what the color of the wedding should be. Navy? Green? Unaware of this, Savta asked semi-innocuously if it would be alright if she wore a champagne dress, a color that each side immediately took a liking to,  effectively brokering a truce. She and Saba walked down the aisle at our wedding in her beautiful dress

The Town & Country article continues that To ensure the British throne is never vacant, Prince Charles, the Queen’s eldest son, would automatically become King. “He has been preparing all his life. It should be reassuring that there will be a familiar face taking the Queen’s place.” As a real estate agent, her secret weapon was to write notes to people selling their houses on their own to instead sell with her. And it worked. Savta, I know it’s been a while since you were selling real estate, but we need you to dust off your power of persuasion. We are in the midst of the most auspicious days of the year leading up to and after Rosh Hashannah and Yom Kippur. We need you to use your abilities to help the Almighty shower us with comfort. To shower our family and our people with blessings. We have no Prince Charles, no familiar face to assume your role in our family. We are so thankful that we have Saba, who will stoically carry us through as a family. But unlike the throne, there is a gaping hole in our monarchy that we will not be able to fill. We ask you to storm the Heavenly throne and tell God to give us comfort, because we so desperately need it.

Just a week from right now many of us will be back in the synagogue as we mark Rosh Hashannah, our new year. Some of you will be in this very room, a room that I had previously only been in for simchas, happy occasions. Next week, we will read on the second day of Rosh Hashannah the words of the prophet Jeremiah. He explains “Kol berama ishmah nehi bechi tamrurim, Rachel mevaka al baneha me’ana lehilachem al baneha ki einenu,” that a voice from on high can be heard, a lament of bitter weeping. What is that voice? Where does that piercing cry emanate from? Rachel crying for her children, crying so uncontrollably for her children since they are not with her. Savta’s Hebrew name is Rachel. Rachel mevakah al baneha ki einenu, Rachel is crying for her children. The commentaries explain that Rachel cries for her children who are in exile, cast away from the Holy land where God’s presence resides. But for us, it is the opposite, for it is us down here who are crying so uncontrollably, because we, your children are not with you.We’re all present but it’s you Rachel, it’s you Savta who are not here. This new normal is something that even in the throes of her illness that I ever considered coming about, a sentiment shared by many in our family. We simply could not imagine this day coming to be. A woman who fought so valiantly through pain and suffering, through the love and care of Saba, Aunt Lynnsie, Uncle David the chief medical officer, and our beloved Katina and Ashley. It still hasn’t truly hit me that we’re here and this is happening. Despite my wanting for this all to be some sort of horrible dream, I know it’s not.

My father commented to me that there’s a clock in my grandparents’ house with an inscription on the back of it. “Rebe and EB ‘til the end of time.” I have not been privy to witnessing a love like that of my grandparents. There has never been another relationship like theirs. Saba wasn’t ready. None of us were ready. He would have continued caring for her so lovingly until the end of time, and not just because that clock said so. Sadly for us, the clock may still be ticking, but there is no time left for us with her. We will miss you Savta. We will never forget you.