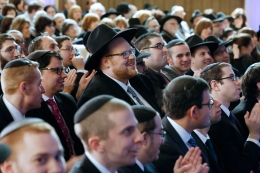 There exist in our lives days that we will never forget. Happy occasions, somber ones. We’ll remember our feelings. The sights and smells around us. It’s as if the world is standing still. For me, and 130+ of my friends and colleagues, yesterday was one of those days. It was the day in which we were recognized for our years of study and completion of rabbinical school. Granted, some have long been finished while others are scrambling to complete a myriad of bechinos in a timely fashion. Yes, the ceremony itself could’ve been more succinct and to the point. It is also true that the seats in YU’s Lamport Auditorium could not be more uncomfortable. Yet, it was one of the most exhilarating and exciting days of my entire life. 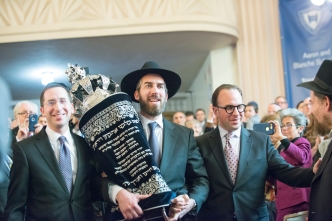 The moment from the Chag HaSemicha that sticks out the most to me was the special award presentation made to Rabbi Hershel Schachter. This year marks Rav Schachter’s 50th year teaching Torah at Yeshiva University, an unbelievable accomplishment. But what made it truly special was the Sefer Torah that was commissioned in his honor and presented to him during the ceremony. One son carried the Torah down the aisle, flanked on both sides by a brother, until they reached the stage. They ascended, along with many of Rav Schachter’s granchildren, sons-in-law, and mechutanim, and the Eitan Katz led the entire room in song. Rav Schachter is a walking Sefer Torah, and it’s only fitting that he be presented with a Torah scroll, one that will be housed mere feet from his seat in the Glueck Beis Medrash. 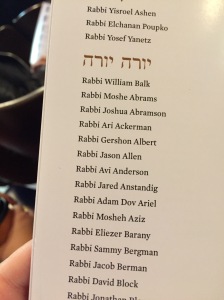 Graduating FIRST on the list of Yoreh Yoreh musmachim. After weeks of joking about this with my family a clerical error somehow placed me there (or did it?).

I cannot truthfully refer to Rav Schachter as my own “rebbe” as I was never regularly in his Talmud shiur nor seeked his counsel on various life issues. Yet, more poignant to me than the shiurim of his I’ve attended or halachic questions I’ve posed to him is the fact that the while he may not have been my “rebbe”, he served this role to most of my rebbeim. Had Rav Schachter never become a staple of Yeshiva University, his thousands of talmidim would’ve no doubt learned Torah from another master, yet I’m convinced the very landscape of Mordern Orthodox Jewry would be vastly different.

After the Chag and following a lovely reception with my family, Estee and I raced over to a different kind of celebration. My shul’s dinner (my apologies for lack of pictures, as our phones had died and the pictures haven’t been posted just yet) was a celebratory event recapping the successful, wonderful tenure of our senior rabbi, Rabbi Shmuel Goldin, and his wife Barbara, and the indelible mark they have stamped on the Englewood Jewish community (and beyond). The significance and symbolism of these two events occurring just hours apart is not lost on me. The new musmachim sat and heard about the power of what we can accomplish in our field. Later on, I was privy to see just how one such figure went about doing that. Although Rabbi Goldin will have only been my rav for a short period of time before he makes aliyah, I’m reaping the reward for his 33 years of ingenuity, making our synagogue into the very community that it is today. Much like Rav Schachter, Rav Goldin’s reach is incredibly broad, extending far beyond the daled amos he is currently situated.

Some of my colleagues who were celebrated yesterday are well on their way to impacting their communities and the broader Jewish community at large, while others may be situated in a more nascent state. The potential exists for all of us. Yesterday, I watched to particular rabbis, among others, be recognized for their years of maximizing their potential in their given fields. It is my wish that we, the new musmachim, are able to merely approach to the standard they set for rabbinic excellence.

Click here to see more pictures from the 5777 Chag HaSemicha.

One thought on “Potential”