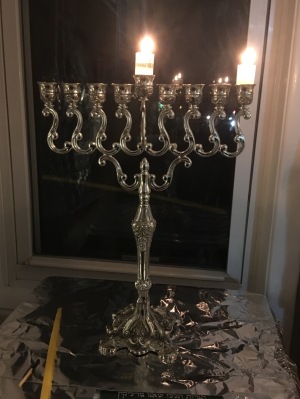 The miracles of Chanukah transcend the laws of nature, derech hateva. Rabbi Gavriel Zinner, author of the encyclopedic series Nitei Gavriel and rabbi of a congregation with that same name, explains that Chanukah is the time on our calendar that teaches us that nature has no power without Hashem. He quotes the Chiddushei HaRim that the thought process of the Yevanim was solely based on derech hateva. It never occurred in their minds that there could be a divine force that could combat the natural order of the world. This is the exact koach of Ner Chanukah, going above and beyond nature, lemaalah min hateva. This enlightens and showcases to Klal Yisrael that nature has no power without divine placement. This, notes Rav Zinner, is the exact opposite of the logic of the Greeks, who wanted to tie everything to derech hateva. The natural order of the world is an ironclad belief system, but when it comes to Hashem, the Being that set derech hateva in place, all bets are off.

As Jews, we know that the Almighty is capable of bringing about unbelievable miracles in our days, just as He did in the times of the Chashmonaim and before. Nevertheless, we are commanded to not rely solely on miracles to save us. This wily band of Jews fought valiantly, all the while not knowing if they’d be victorious, let alone even stood a chance against the ferocious onslaught of the Yevanim. Hashem, in His mercy, aided the Chashmonaim in trouncing the Greeks, and in doing so, obliterated the Greek notion that the world relied only on derech hateva. For Hashem, there is no derech hateva. As we say in Al Hanissim, Hashem “delivered the mighty into the hands of the weak, the many into the hands of the few, the impure into the hands of the pure, the wicked into the hands of the righteous, and the wanton sinners into the hands of those who occupy themselves with Your Torah.” Where is the derech hateva? What’s happened to the nature of the world? Nature would teach you that the mighty would triumph over the weak, or that they would prevail by outnumbering them. Nature would laugh in your face at the mere possibility that these dominant, wanton sinners would be clobbered by a puny group of Torah scholars, whose time was spent more in the house of study than on the battlefields. While the Greeks, and the rest of the world looking to destroy the Jewish people are left scratching their heads, we stand are able to stand tall. We know that to go lemaalah min hateva, to go above and beyond the laws of nature, is precisely the derech hateva of the Almighty.